(CNN) — The video clip lasts a mere 35 seconds. It’s night. Six men, illuminated by a flashlight, are sitting with their hands tied behind their backs and with various types of blindfolds.

More men huddle behind them in the dark. In front of them is a pit, apparently freshly dug, and on the other side of the pit sits another man similarly bound and blindfolded.

Two seconds into the clip, someone says, “Jahiz?” “Ready?”

At three seconds a man extends his right arm into the light, holding a pistol. 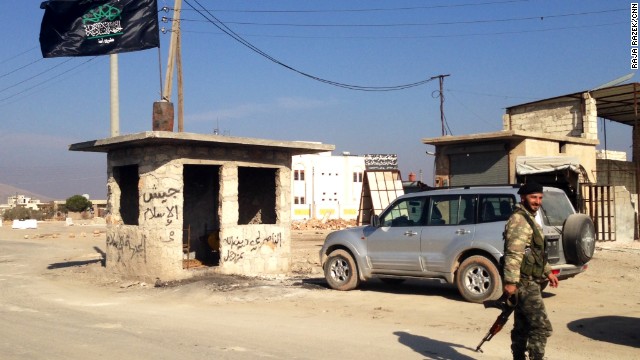 At six seconds the first shot is fired into the back of the first man’s head. The man with the pistol moves decisively, without hesitation, shooting one after the other in the back of the head. It would appear he has done this before many times.

Eleven seconds into the video clip, you can hear what sounds like open faucets. It’s the sound of blood gushing from the head wounds. And the gushing sound gets louder and louder.

Twenty-six seconds after the first shot is fired, a total of 14 men — some of whom appear to be teenagers — are dead or dying, some slumping into the pit.

This video clip was one of a variety recently obtained by CNN from Syrian activists. They document atrocities committed not by the regime of President Bashar al-Assad, but rather by members of the Islamic State in Iraq and Syria, known as ISIS, which emerged last year as a major power in opposition-controlled parts of northern Syria.

In the areas controlled by ISIS, public floggings and executions have become commonplace. Most recently ISIS has battled other opposition groups in fighting that has left well over 2,000 people dead.

The material CNN obtained provides a snapshot of the inner workings of ISIS, a group using methods and tactics not unlike those of the regime that Syrians rose up against almost three years ago.

The material provided by the activists was found in a house in Aleppo occupied by one “Abu Ahmed Al-Iraqi,” or “the Iraqi.” As is so often the case with members of these radical groups, this is not his real name. He abandoned the video clips, as well as the camera they were shot with, when ISIS retreated from the area during fighting against other opposition groups.

Activists describe Abu Ahmed as an “amir,” a commander, responsible for carrying out justice, ISIS style. He is, in effect, judge, jury and executioner. He appears to be the man who carried out the executions described above.

The other clips include eight interrogations of men, most of whom are members of opposition factions not affiliated with ISIS, all operating in or around the town of Al-Bab, northeast of Aleppo. It’s not clear whether Abu Ahmed Al-Iraqi is doing the interrogations, but the strong Iraqi accent of the interrogators leaves no doubt about where they come from.

No torture occurs on camera, but it’s clear the subjects are under duress. They are all blindfolded, and several sweat profusely. The line of questioning is persistent, always focusing on the activities and opinions of opposition members. Not once in the course of the lengthy interrogations is a single question posed about the Assad regime. In fact, it’s not even mentioned.

There are veiled threats; one of the men, who identifies himself as a doctor named Basil, is asked if he ever wants to see his two children again. Another young man, Mohamed, is told to speak the truth to “save himself.” He responds by saying, “I will speak the truth, even if I lose my head.”

ISIS is clearly worried that many Syrians view them as unwanted interlopers. Thousands of young men have flocked from around the world, including Europe and North America, to join the fight against the Assad regime, and many of the more radical among them have joined ISIS and other jihadi groups.

You can hear what sounds like open faucets. It’s the sound of blood gushing from the head wounds.

At one point the interrogator demands of the aforementioned Mohamed: “Didn’t people say ISIS are strangers? That they wear “chabounat?” Chabounat is a derisive term referring to the short jalabiyas, or robes, worn by hard-line Islamists to copy the attire of the Prophet Mohammed. Chabounat in this case might be the equivalent of petticoats. Mohamed wisely claims complete ignorance.

From the video clips, it appears that Abu Ahmed has made a life for himself in Syria.

In a series of clips he is instructing a young woman in a black coat how to use an AK-47 assault rifle and a pistol. Her face is exposed — she is not wearing the “niqab,” which completely covers the face and has become de rigueur dress for women in areas controlled by ISIS. She speaks with a Syrian accent.

He’s also getting around in a late-model black BMW SUV. And in another video clip, he is doing target practice in the garden of a high-walled villa.

A fancy car, nice house, interrogations and mass executions: meet the new boss in this part of Syria. Same as the old boss.