The bodies of Honduran beauty queen Maria Jose Alvarado, 19, and her sister have been found nearly a week after the two women disappeared.

Ms Alvarado and Sofia Trinidad, 23, vanished on Thursday after being seen leaving a party near the northern city of Santa Barbara.

They were shot and their bodies buried in a field by a river, police say.

Two men have been arrested, and one of them has reportedly confessed to killing and burying the women.

Ms Alvarado had been due to compete in the Miss World contest in London.

The organisers of the contest joined in paying tribute to the dead women.

Plutarco Ruiz, said to be the boyfriend of Ms Trinidad, was detained along with another man, Aris Maldonado.

The bodies were found in the village of Cablotales, near the River Aguagua, police announced earlier. 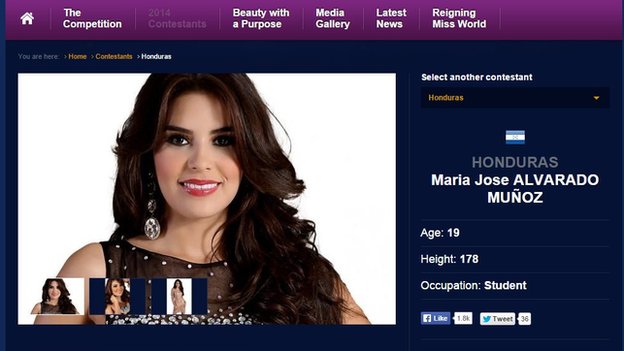 Gen Sabillon said Mr Ruiz had confessed and led the authorities to the burial spot. No comment from Mr Maldonado was available immediately.

Weapons and a car have been seized as part of the investigation and a “protected witness” has been providing valuable information, National Bureau of Criminal Investigation chief Leandro Osorio said.

“They were not very astute about assessing the people around them,” the sisters’ mother, Teresa Munoz, told Honduran broadcaster Televicentro, according to AP News agency.

Continue reading the main story“They were just friendly. They were taken out by people they hadn’t known very long.”

Organisers of the Miss World pageant issued a statement expressing their condolences, and announcing a tribute this weekend in honour of the dead women.

“We are devastated by this terrible loss of two young women, who were so full of life,” they said.

“Our thoughts and prayers are with the family and friends of Maria Jose Alvarado and Sofia Trinidad at this time of grief.”

According to a UN report, Honduras has the world’s highest homicide rate, with 90.4 people murdered per 100,000 of the population.

The story has dominated the front pages of the main Honduran newspapers since the disappearance of the women was announced on Saturday.

All the major papers feature pictures of the beauty queen on their front pages – in which she is seen in formal gowns or bathing suits wearing the Miss Honduras sash or her crown.

The paper says Honduras has decided not to send another contestant in her place as a sign of respect.

“A lot of girls die this way, but because they’re not famous, it doesn’t get the attention and the crimes go unpunished,” Mr Nasrallah said.

“She was a girl of good principles who fell into a trap, a game with guns, and ended up a victim of a violent system.”

Before confirmation of the women’s deaths, supporters believing that they had been abducted had protested in Santa Barbara, demanding their release.

WORLD NEWS: When did Xi know about outbreak? Former volleyball stars and daughters killed in crash, Ex-Disney actress dies at 15