Riders ready to race at the #SCBF Dezzi Festival of Speed

Every class of motorbike will get a chance to shine at the Dezzi Festival of Speed taking place on Saturday at the South Coast Bike Fest #SCBF2017 presented by UGU South Coast Tourism.

Forming part of the #SCBF2017 programme, the Dezzi Festival of Speed comprises a number of fast-paced biking events taking place throughout the day at the stunning Dezzi Raceway in Port Shepstone on the KwaZulu-Natal South Coast.

“This is really an action-packed event programme that will provide non-stop entertainment for bike lovers as well as those with little knowledge of motorbikes and racing,” said Dezzi Festival of Speed race organiser, Bob West. “We’ve made sure this is really a spectator-friendly day with a variety of motorcycles and riding styles all set against the magnificent backdrop of the Indian Ocean.”

The event kicks off at 7.30am with a biking blast from the past as the 2 strokes take to the track to burn some oil in an epic race. They will be followed by a range of bikes from 600cc to 1000cc as the Breakfast Runs gets underway promising 10 laps of skilled racing action.

A crowd favourite – the 150 Honda and Scooters – will then go head-to-head followed by the not-to-be-missed Legends car race. Originating in the 1930s and 1940s, the Legends vehicle is a compact car shell fitted with a 1300cc motorbike engine, and these zooty cars always make for a fantastic spectator sport.

The Bike Attack, which follows the Legends race, will see some 20 motorbikes completing 10 laps of the Dezzi Raceway with judges looking at both speed and consistency. One prize will be awarded to the fastest rider, and another to the most consistent rider on the track.  Then it’s anything goes in the Open Class race with Super Singles and Powersports getting some time in the limelight.

Because of the magnitude of the #SCBF, representatives from biking clubs across the country will be in attendance and club members are urged to come support their club presidents at the highly-anticipated Presidents Club Bike Attack challenge. The racetrack allows for 27 contestants so expect some skilled riding.

And, if you’re interested in testing your riding skills, then be sure to enter the day’s highlight event – the public Bike Attack – which is open to all bikers attending the #SCBF2017. The fee for entrance is R750 per bike which includes the MSA licence and medical insurance. For those with a valid MSA licence, the fee is R300 per bike. Registration is available at www.quicket.co.za.

The Dezzi Festival of Speed will end in style with a biker parade heading from the Dezzi Raceway to the Experiential Energy Zone – where Red Bull will be keeping crowds refreshed – in Margate at 3.30pm.  Each programme event will have a qualifier round followed by two heats before the winners are announced at the prizegiving ceremony which takes place at Margate beachfront from 3.30pm.

“Event organisers have really gone out of their way to plan a really comprehensive biking programme for the Dezzi Festival of Speed,” said Justin Mackrory, CEO of UGU South Coast Tourism. “This is just another exceptional drawcard to the overall South Coast Bike Fest, making it such an ideal event for the national biking community.”

The 2017 #SCBF runs at Margate from 27 to 30 April with something for everyone. There will be eight festival-themed bars, eight corporate dealership decks, 22 on site restaurants, pubs and clubs as well as 35 of South Africa’s top bands on offer. The Village Margate Trading Square will be selling quality biking products with buskers, street artists, Samba dancers, fire eating and craft beer villages situated within the Mardi Gras Village.

Tickets to the #fuelyourfun Carling Main Beach – which lets you watch the likes of PJ Powers, Mathew Mole, Tender Mavundla and Freshly Ground among many others – are also available at www.quicket.co.za at a cost of R130 per day or R200 for the cocktail bar day pass. For a VIP four-day pass the cost is R360. Children under 12 enter free.

Keep up to date on all the event happenings via: 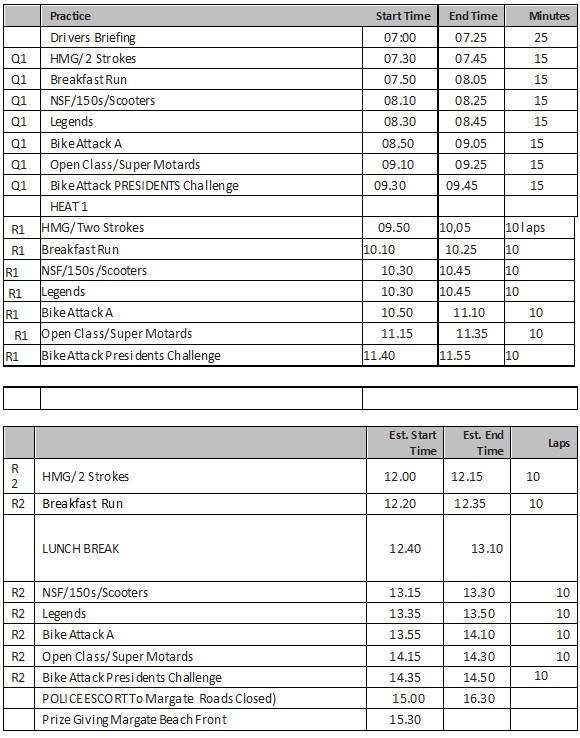