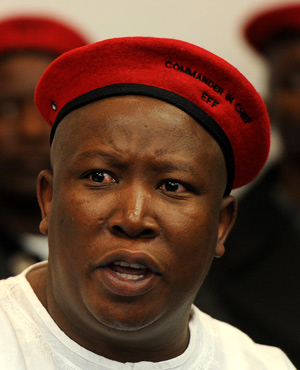 On June 27 2013 legal counsel for Sars addressed a letter to Malema and his legal representative, cautioning him to refrain from making false public statements about the state of his tax affairs and his engagements with Sars.

“Sars is still involved in various aspects of litigation with Mr Malema and entities associated with him,” Sars said in a statement released on Friday.

Malema was afforded a period of 48 hours to rectify certain statements which Sars claims are false allegations.

Sars denies that there was an agreement in principle for Malema to repay outstanding tax liabilities.

Sars also denies that this supposed agreement and a request by Malema for a compromise was “breached” by Sars due to political interference.

There has been no “concerted effort” to discredit Malema, according to Sars, nor has it caused the farm Schuilkraal to be sold to remove all means for Malema to generate an income.

“In subsequent weeks, Mr Malema has not only refused to correct his lies, he has in fact repeated such allegations in various news interviews,” Sars said in its latest statement.

“Normally Sars would prefer not to allow legal and other processes of engagement with taxpayers to be side-tracked by questionable public campaigns in the media.”

Sars said it would prefer to rather make its case before the relevant legal platforms at appropriate times instead of getting involved in “public spats with non-compliant taxpayers”.

Sars, however, considers the public comments made by Malema and reported on in the media, as a serious threat to its integrity and that is why it has deemed it necessary to respond officially.

“No single person in Sars can decide who to investigate, who to audit, who to settle tax debts with and who not to,” according to the statement.

In January 2010 Malema claimed to be in possession of an “intelligence dossier” which in his view, proved that Sars had a special unit that was focusing on him and other persons because of their association and support for President Jacob Zuma.

“It is ironic that Mr Malema is now claiming the exact opposite,” according to the Sars statement.

“At the time he claimed that these documents originated from within the state intelligence agencies. Later this so-called “dossier” was in fact revealed to be a product of a disgruntled former Sars-employee, who was dismissed because of his involvement in rhino-poaching.”

Sars even met with Malema to take him through the entire “dossier” and to demonstrate to him the fictitious nature of the content. At the time Malema indicated that he accepted Sars’s explanations.

“In recent media interviews he has suggested that he approached Sars at the start of the process that has led to his predicament now. This is not true,” according to the Sars statement.

Sars stated that during 2010 it made contact, on its own accord, with Malema after he had failed to submit his tax returns for a number of years.

Responses in respect of outstanding returns were only received when Sars repeatedly requested such information over many months.

It took him a period of more than 18 months to file his outstanding returns.

“Ultimately he failed to regularise his tax affairs,” according to Sars.

In relation to the trust under Malema’s control, Sars said that even after a number of requests he still has not registered it for tax purposes.

“Neither of these situations – his personal income tax affairs and that of the trust – was helpful in demonstrating his willingness to comply with his tax obligations,” said Sars.

“Such situations do not only speak to the failure of Mr Malema to comply with his statutory obligations, but also the fact that it is not fair for Sars to treat one taxpayer different from another.”

Sars said that after eventually receiving the outstanding tax returns, on analysis of the information at Sars’s disposal, it became evident that Malema submitted inaccurate information to Sars for the tax years 2005 to 2011.

In respect of the trust under his control, the same was found to be the case.

“All indications were that Mr Malema was attempting to restructure his asset holdings without informing Sars,” according to the statement.

“This situation left Sars with no alternative but to launch a financial investigation into his tax affairs.

Sars said that at no stage was the Ministry of Finance, the commissioner or deputy-commissioner for Sars in any way involved in the operational aspects of the investigation, nor the decision to commence with the financial investigation.

Malema’s allegation that particular racial groups are “conspiring” against him is “ludicrous” according to Sars.

“As outlined, the behaviour demonstrated by Mr Malema has shown a consistent disregard for his obligations as a taxpayer,” said Sars.

“This is not the sort of behaviour the millions of honest taxpayers in this country should condone. His non-compliance is purely a tax matter – it has nothing to do with past or current political processes in the country.”

Sars said Malema accepted that he owed Sars R16m in tax, but he did not offer to convert any of his assets towards his tax debt. He did not request any form of payment arrangement.

“Instead, he attempted to dissipate assets beyond the reach of Sars,” according to the statement.

“Mr Malema must, as we all do, face the consequences of his actions. He had ample opportunity to utilise the various mechanisms provided for in law to state his case.”